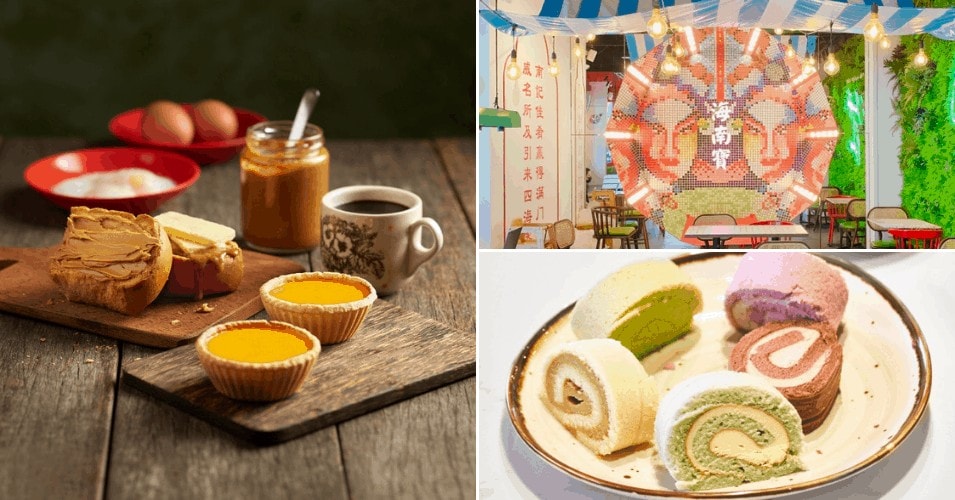 The words coffee shop and instagram don’t usually go together — except for the eye-catching The Hainan Story at Hotel Boss. This new concept located near Lavender is a rare Kopitiam that will make your feed pop.

The Hainan Story is a modern coffee shop concept that puts a sleek, trendy spin on traditional Hainanese fare. This second outlet at Hotel Boss is a 24/7 concept that will serve you any time of the day you want — from breakfast to supper.

What makes this place special is its decor, which is a vibrant throwback to the past. It’s a refreshing change from the plain and somewhat sterile decor of many modern food courts.

They also set up their tables and chairs to throwback to traditional Hainanese coffee shop vibes.

But the highlight of The Hainan Story’s Hotel Boss outlet has to be the striking feature wall. They use a collection of colourful tiles to create a photo prop that pays homage to traditional Hainanese Opera.

However, another new addition is The Hainan Story’s own bakery, a Hotel Boss exclusive. It will be serving traditional cookies and Swiss rolls, made by Chef Pang from the popular Antoinette, which closed last year.

The British Hainanese Swiss Rolls go for S$12.80 per roll, S$3.80 per slice. There are a bunch of traditional flavours diners can pick from, such as Hainanese Coconut Pandan, Sea Salt Gula Melaka Kaya, or Nanyang Yam Orh Nee

Alternatively, the fancier Premium Old Tree MSW Durian is also available for durian lovers, at S$28.80 per roll and S$6.80 per slice.

But if you want heartier options, there’s also a Coffee & Toast concept by The Hainan Story at Hotel Boss.

There’s also a really unique Bagel Spam & Egg Burger ($5.80). It comes with spam luncheon meat and choice of sunny side up or scrambled egg.

Its ingredients are sandwiched within old-school bagel that comes from popular Sing Hon Loong.

Besides that, they also introduced a new Hainanese Yuan Yang Satay with Peanut Sauce and Pineapple Sauce (S$15 for 10 sticks) for The Hainan Story’s Hotel Boss outlet.

These are available in both pork or chicken variations, and they added a twist to the combo with their special pineapple sauce. So you get a combination of satay sauce richness and fruity sweetness — the best of both worlds.

Jin Jin Golden Porridge is one of the new concepts at The Hainan Story’s Hotel Boss outpost, but their porridge is probably the biggest eye-candy here. Every bowl is dyed in a gorgeous orange-gold.

The porridge actually gets its colour from pumpkin puree, which adds a sweet complexity to the porridge. For a heartier meal, go for the Pork Meat Ball Trio Egg Pumpkin Porridge (S$9.80).

Another new concept here is an interesting Kway Chap stall. Unlike typical Kway Chaps, they serve theirs with a white broth that’s a mix of chicken and pork.

For added oomph, consider their Hainanese Claypot Braised Pork Belly Set ($13.80). The braise sauce from the Hainanese braised pork belly and runny ramen egg can add even more richness to the dish.

However, for those looking for something more adventurous, then the deep-fried pig intestines in the Crispy Fried Pig Intestine Set ($11.80) would be more up your alley.

If you’re looking for a new cool supper spot, or just a quirky place to enjoy heritage food then don’t sleep on The Hainan Story.